This is a set of infographics that  are about waste. These graphs are informative and will help you to get a broader understanding of waste in Argentina as well as strengthen the material stated on the waste page.

This graph show the amount of money a country makes and how much waste it generates. Rich countries produce more waste in general and poorer countries like Argentina produce less waste. For example the U.S has more money and more waste, Argentina has less money and less waste. 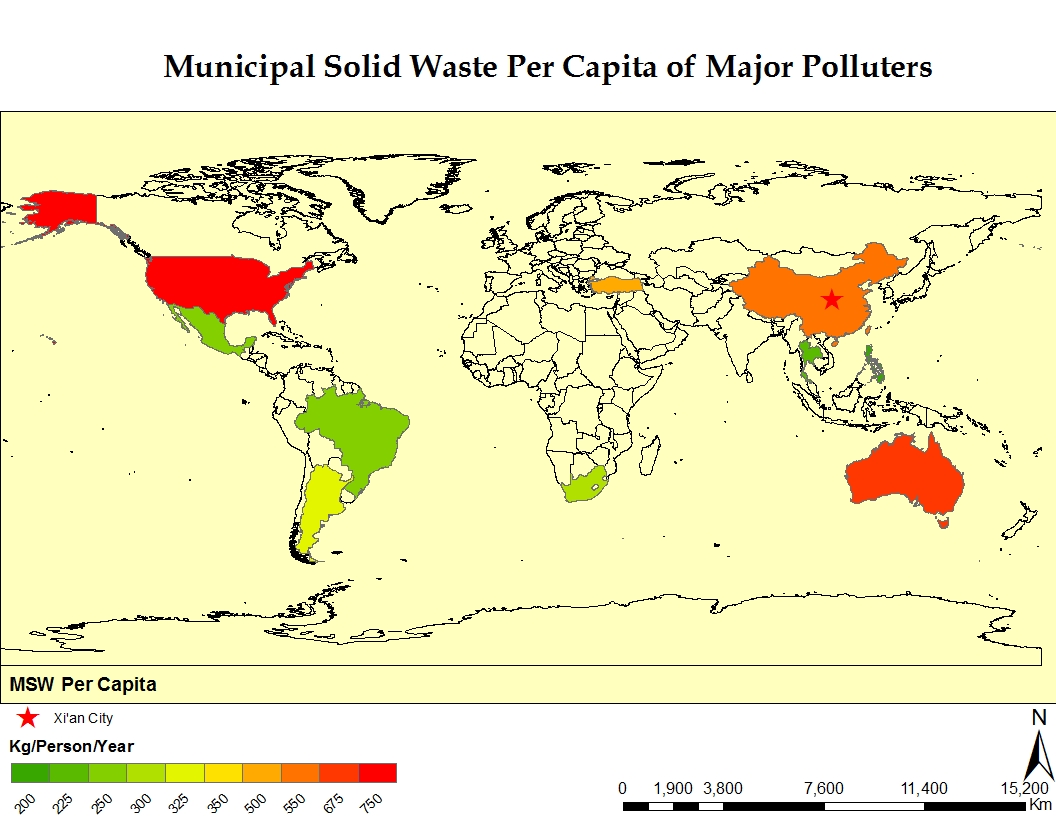 This graph shows the top contenders for waste and pollution contributors and Argentina is among the top nations that produces a high percentage of the waste per capita in the world.  Although Argentina lies right in the middle of the scale, it is producing a lot of waste.

Solid waste is a major problem in Argentina and the bigger problem is that there is not sufficient establishments for proper disposal. This graph shows Buenos Aires and the surrounding area and the type of garbage that is produced. Paper and Organic waste are over half of the waste that is being produced.  Plastic also makes up a large portion of the chart.

This photo essay detailing Argentinian history focusing on the political crisis that ensued following a major economic crash helps illustrate the political climate of the country in recent years.  By viewing and analyzing the country’s internal state, one is able to understand where the focus (economically and environmentally) of the government lies.  In recent years, with much political turmoil and economic crisis, it is evident that environmental concerns were perhaps not the main priority of the Argentinian government.  It is advised to click each photo to view a highly informative description of the photo and tense climate many Argentinians found themselves to be in.  The viewpoint of the Argentinan people is crucial and more apparent with this infographic.

Here is a graph from a thesis from Natali Ganfer at Columbia University. This graph shows the amount of waste per day given socioeconomic status. It is a good illustration that pretty much every citizen in Buenos Aires produces the same amount of waste no matter what class level they belong to. The entire thesis is a great resource for public surveys on the current waste programs as well as research data on new, “green” recycling plants.

The above infographic is incredibly useful in analyzing the governmental allocations of public spending within certain regions of Argentina.  It is evident from the map that certain areas within the country have more government aid directed their way.  For instance, Southern Argentina does seem to have much fewer allocation of public spending budget in comparison to Northern Argentina.  The reasons for this are varied as more populous cities may receive greater amounts of aid.  An important message to take away from this particular graph and part of our infographic is the idea of importance and what the government finds most important.  This or these priorities will get most money allocated to their cause.  The question is whether the environmental budget, in particular waste and recycling management, is one of those priorities.

The above link gives access to an informative infographic detailing the current understanding of the rising issue of electronic waste on a global scale.  The infographic is a part of our multimedia page as a way to give basic knowledge about e-waste:  transportation, composition, and marketability.   Some interesting points to note include: the global transportation of e-waste, disposed vs recycled products, and alarming rates of pileup.  First, the United States, the European Union, Japan, Australia, and South Korea are all sources of major e-waste.  There are many suspected sources of destination for this enormous amount of e-waste, Argentina being one of these destinations.  There is an undoubted effect on these e-waste destinations, learn more at the above link.

The above infographic speaks to a specific portion of the e-waste problem – cell phone waste.  Cell phones are easily discarded, especially in a global climate where throwing away material goods is done mainly without hesitation.  However, there are serious repercussions to this waste and it must be transported somewhere and be kept out of sight by those throwing electronics away.  This infographic goes along with many of the above infographics because it expands on the idea that waste has become truly globalized.  Your waste is no longer only your issue, in fact, your trash may be affecting citizens across the globe.

All of the above infographics are inter-connected and provide different ways to look at the same theme – waste and recycling management.   Through the above infographics, it is crucial to note the globalization of waste and the tendency of developed countries to ship away waste, as an almost NIMBY (Not In My Back Yard) like approach to the issue.  The implications of waste and inefficient waste management is an issue for all countries – unfortunately, the issue is unavoidable and commands attention from all countries as it a byproduct of life.  Indeed, we have included the importance of efficient waste management and recycling efforts as well as barriers to efficiency.  It is impossible to analyze waste in Rosario and Southern Argentina without acknowledging government spending and allocation of aid.  This aid is only given if these waste and recycling initiatives seem urgent and pertinent.  Inequality in government allocation of aid to region and certain programs may lead to slow progress in the reform of waste in Rosario and Southern Argentina.

Additionally, in our collection of infographics we remarked on the importance of acknowledging socioeconomic standing and waste produced, along with different types of waste.  Of course, by giving global comparisons and comparison with the United States the current state of waste management in Argentina is easier to comprehend and relate to .  Indeed, to understand waste priority in our region we also added other important social and political factors that have been contributing to the internal state of Argentina.

All in all, there are many factors that contribute to the issue of waste and recycling management.  We hoped to provide diverse contributions that would lead to a more well-informed understanding of the issue at hand and quite possibly strive for more efficiency.